G - The Game Of Perception 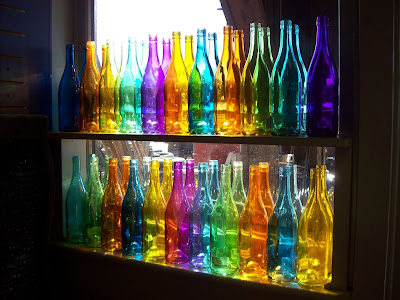 PC : Unsplash
A bunch of tinted bottles
Sat atop the counter muddled
In varied colors
They glistened anew
With each ray of light
That passed them through
Few of them tried captivating
With their charismatic glow
While some others shined
Like a myriad of hues in a row
All trying hard with their charm
With just a single purpose under the arm
To be that one
Of those chosen few
Which can adorn aesthetic spaces
And spend their lives
In blissful luxury of that woo
Leaving behind those, according to them
Whose fate was sealed
To be abandoned
As valueless into the backyard field
So, there thus lay those ill-fated ones
Whose bashful glamour
Couldnt keep up with the fancied runs
And went through the grind thus they
To be reduced to shards in such a way
So as to serve as an incandescent bulb
Or as a masterpiece in an art hub
But then, those ornamental tinted glasses
That were busy in their show
Never saw the destiny of these
Nor even ever got to know
For that's the order of the universe
And will always be
As, if, perceptions were to go
That might just leave behind another limbo
PS : This post is posted as part of #BlogchatterA2Z 2021 challenge for the letter G.
Poem posted as part of the 30 day poetry challenge for the month of April #NaPoWriMo2021 and #ArtoonsInnPoetryParlour
Posted by Ira Mishra at 7:21 PM

very profound!
loved these lines "Never saw the destiny of these
Nor even ever got to know"

This reminded me of Celine Dion's song - let beauty come out of ashes. At once sad and hopeful.

Wow! You've captutre The Geeta and the wisdom of the ancients in these bottles Ira. Loved it.

A very deep and insightful piece, Ira. To explore the concept through colored glass bottles, wonderful.

The philosophy of life explained through these glass bottles! Some will lead a life of decadence while others will be crushed as per the game of destiny! profound piece!

A beautiful poem. Thought provoking too. Those who are in limelight usually don't bother about those who are left behind. A sad reality of life.

some dreams are crushed while no one bothers. 'As valueless into the backyard field
So, there thus lay those ill-fated ones' These lines were absolutely well crafted.