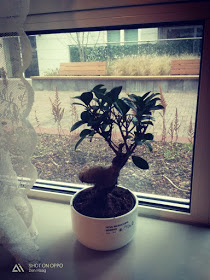 And one fine morning, there it was
Standing outside the Witch's door
With a promise yet again
To befriend till eternity
A familiar echo of words
Reverberating from the days foregone
That had once ended
Without an epilogue
Or maybe this too was kind of a sign
Another moment of epiphany possibly
That to hope for an everlasting vow
Could only but be a bait for the heart
To be trapped again in that labyrinth of hope
But, alas for that stubborn heart's belief
In all that was infinite or tilted towards it
Like that of eternity and that of hope
And, come to think of it
What if, hope was all but finite
Or even for that matter
All those promises of eternity
Would life still have turned out to be the same
So, just for that devil called hope
Only for its sole sake
The Witch decided to play host again
To the promise of that thing
Hoping that its wooden bark
Atleast this time, yielded greenery
And if not for eternity
This one time, maybe
Whenever that mirage ended
It will end with an epilogue
PS : This post is posted as part of #BlogchatterA2Z 2021 challenge for the letter E.
Poem posted as part of the 30 day poetry challenge for the month of April #NaPoWriMo2021 and #ArtoonsInnPoetryParlour
Posted by Ira Mishra at 7:39 PM

Lovely poem of Hope and promises of eternity. The mirage will end with an epilogue! Wow!! The thoughts conditioned me for more reading! Bravo!

Hope is all we have.
Beautifully crafted Ira. Love the light that you shed on the dark, i.e. that which we refer to as the Witch in popular literature.

So beautiful! The flow is perfect with a blend of sadness and hope. What's life without hope, and id we can bring some greenery and delight when hoping, why not ask for it?

Hope is so illusory. Yet we latch on to it.
Another beautiful composition.

You weave magic with your words!

love how your poetry ebbs and flows!

It will end with an epilogue - what a beautiful way to end the poem.

Hope and pain...How beautifully you craft them together.

This evoked so many emotions. Loved it.